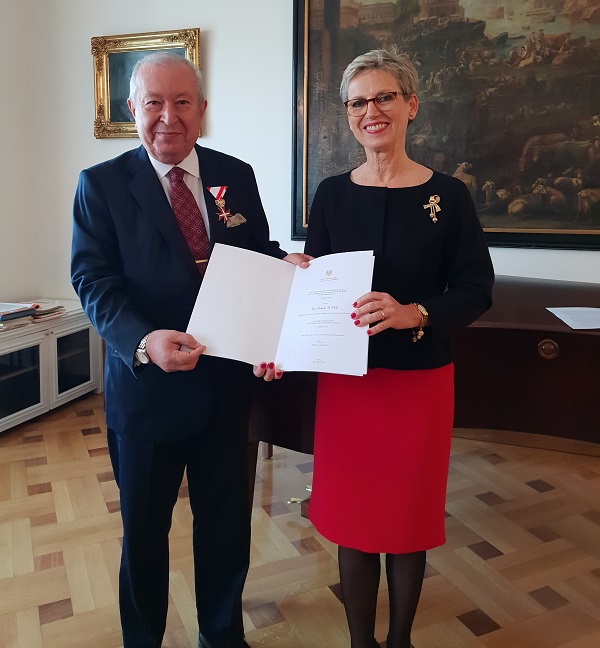 The Austrian State awarded the “Decoration of Honour in Gold” To Dr. Akkan Suver, President of the Marmara Group Foundation.

Dr. Akkan Suver was awarded with the Decoration of Honour in Gold by the Austrian State during a ceremony held by President of Austria, Alexander Van der Bellen at the Austrian Embassy in Ankara.

Former Chancellor of Austria, Dr. Erhard Busek (1991-1995) also took part at the Ceremony. In his speech, Dr. Erhard Busek said that the Marmara Group Foundation is one of the widely-acclaimed and widely-known civil society organizations in Austria. Dr.Erhard Busek emphasized that he came here from Austria just for this Medal and he congratulated Dr. Akkan Suver on his success.

Dr. Ulrike Tilly, Ambassador of Austria to Ankara, presented the Medal to Dr. Akkan Suver and emphasized that Dr. Akkan Suver was honoured with this Medal because of his works that he put forth in the realms of peace and dialogue as a part of the civil society.

In his thank-you speech, Dr. Akkan Suver highlighted the importance the Austrian State places on the thought and philosophy of civil society and maintained that he received the medal on behalf of the Turkish civil society.

The text of speech of Dr. Akkan Suver

Famous philosopher and thinker Edward de Bono's 85th birthday ceremony took place in Malta under the patronage of Maltese President Marie-Louise Coleiro Preca. On behalf of the Marmara Group Foundation, Mrs. Müjgan Suver and Dr. Akkan Suver as well as Dr. de Bono's students from all over the world participated in the event.

President Marie-Louise Coleiro, who held the opening speech of Dr. de Bono's "New Forms of Governance" event, said that he created an opportunity for Malta.

As honorary speaker of the event, Dr. Akkan Suver, presented a paper entitled "Good servant, bad mentor". The speech was followed by Maltese businessman Angelo Xuereb's horizon tour on Dr. de Bono's thoughts. In the ceremonies held at the Historical Verdala Palace, Dr. Suver also talked about the suffering of war in terms of immigration in our region. During the two-day events, the importance of establishing the Ministry of Thought was emphasized. 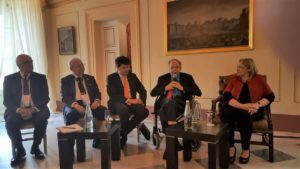 "A good servant, but a bad mentor "